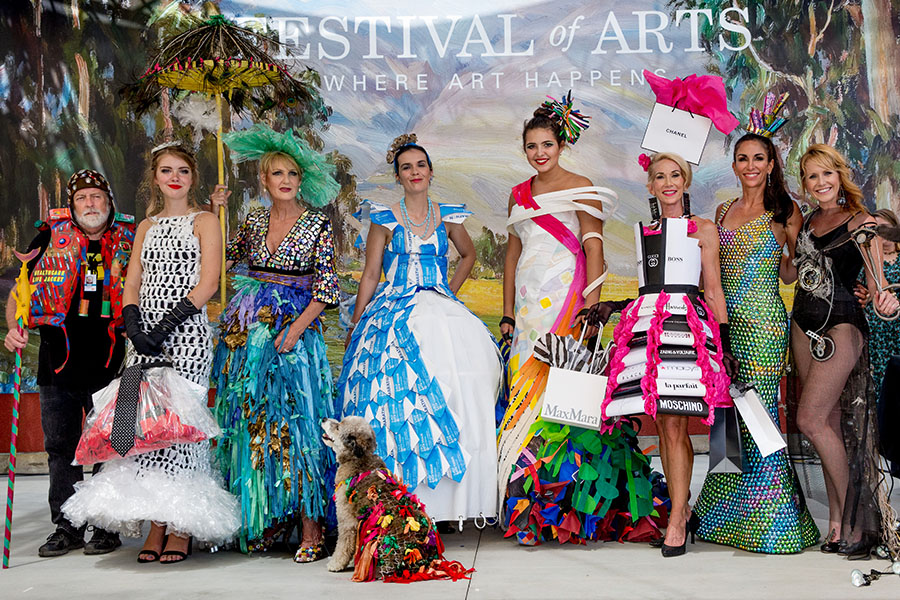 The Festival Runway Fashion Show is a not-to-be missed event! Now in its 11th year, this event features Festival exhibitors who step out of their artistic medium and into the world of fashion. The result will blow your mind with over-the-top creative couture with the twist of all being made out of recycled, reused and reclaimed materials. It is a competition, similar to TV’s Project Runway. Festival artists start months in advance in hopes of taking home the top prize and bragging rights. Patrons will be amazed by this fully produced runway show, including celebrity host and a panel of fashion experts. This event never disappoints, even after ten years, our Festival artists’ creativity and ingenuity keeps it fresh with many surprises!

Patrons will be amazed by this fully produced runway show, including celebrity host and a panel of fashion experts. The fashion show will be hosted by film production designer Nelson Coates. He has worked on such films as Crazy Rich Asians, Fifty Shades Freed, Flight and The Proposal. Coates was nominated for an Emmy for the tv mini-series The Stand and currently serves as president of the Art Directors Guild. Selecting the winners will be a panel of judges including Pageant of the Masters Director Diane Challis Davy, costume designer Alex Jaeger and Radar Online Entertainment Editor Alexis Tereszcuk.

KATE FLANNERY is  an actor, writer, singer, best known for her 9 seasons as Meredith the drunk on NBC’s THE OFFICE.  Kate recurs on ABC’s AMERICAN HOUSEWIFE, Cartoon Network’s STEVEN UNIVERSE and Comedy Central’s ANOTHER PERIOD. She has guest starred on FOX’s NEW GIRL and BROOKLYN NINE NINE and MTV’s MARY+JANE.  She was in the Tribeca Film Fest’s TENURED and SLOW LEARNERS and in the critically acclaimed FORTH MAN OUT on NETFLIX. Kate stars in the HBO short EMERGENCY CONTACT, DIAL A PRAYER with William H. Macy, and the Sundance hit, COOTIES with Elijah Wood.

In addition to two seasons on the worldwide hit Baywatch, Melissa Biggs has made cameo appearances in such films as Lucky Town, acting alongside James Caan and Kirsten Dunst, Rush Hour 2, and has appeared on TV’s Sports Illustrated Swimsuit Collection and The Travel Channel’s Secrets.

As a national and international model Biggs has appeared in the pages and on the cover of dozens of magazines. She’s guest-starred and appeared on the TNT Network hit roller derby show, Roller Jam and appeared in the documentary, Fashion Runway Behind the Scenes, which aired on HBO for 2 seasons. During a two-year modeling contract for a fitness distribution company, her photos were featured on more than one billion sporting goods packages worldwide.

As a casting director Biggs assisted in the casting of Die Hard 3, Something to Talk About, and Ace Ventura, Pet Detective, starring Jim Carrey.

As an entrepreneur Biggs designed and launched her first award-winning consumer product line in 2004, which was snapped up by Wal*Mart and retailed in over 9000 stores worldwide. In 2006 she launched her own clothing line, P.G.D. Style and one week later, GUESS? placed an order for $100,000 worth of product. In 2008 she was voted Best New Designer by Vogue Tokyo, Japan.

As a spokesperson and keynote speaker, Biggs embarked on a two-year national tour in 2007 with CSL Behring, a four-billion-dollar drug company, where she spearheaded a major ad campaign for the monster pharmaceutical brand and appeared in dozens of publications including gracing the cover of several industry magazines.

Thereafter and over the next several years Biggs worked internationally and appeared in various TV and film productions. She co-hosted Planet X-Africa, and starred in the award-winning indie film, Dreamz which took place in New Delhi, India. She also co-hosted and acted as judge in L’occitane’s televised fashion runway event in Kuwait City, Kuwait, and appeared on Good Morning Kuwait, both of which reached more than 160 countries. Her latest international project, The Light of Africa, was sidelined in 2012 when co-star, partner, and international artist, Thomas Kinkade passed away suddenly and unexpectedly during pre-production.

More recently Biggs acted in a leading role in a short film entitled Clarissa’s Gift, directed by award-winning actor/director, Obba Babatunde and was nominated for four awards, including a Best Actress nomination for Biggs.

Today Melissa Biggs is an actor, producer, spokesperson, activist, brand ambassador and entrepreneur. She is a highly accomplished public speaker and is extremely active in her community. Melissa Biggs is currently based in Del Mar, California with her husband, daughter and

Event is free with Festival of Arts Admission. Limited seating available in reserved section for $25 per person.